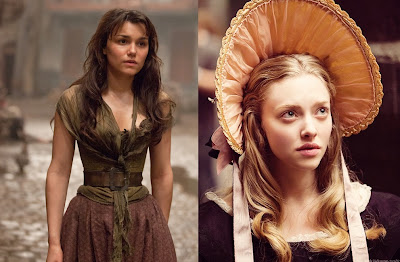 No this is not going to be a post about who i think would win in a fight between the two girls; this is going to be a serious post dammit!! Although I have to admit I would really love to see that fight, seriously, how cool would it be to see those two in a fight Mortal Kombat style! But anyway.....i digress!

So ever since the latest Les Mis movie came out there’s a certain subject I keep seeing discussed mostly around IMDB and Facebook. “Who do you like better, Eponine or Cosette?”
Before I go any further I’ll say it now, I like Cosette!!! I’m firmly on Team Cosette and nobody is going to change my mind on that! Although I am aware from the responses I’ve seen that it’s going to be very lonely being on Team Cosette, I don’t care though, I made my choice and I’m sticking with it.
But having said that I think it’s a very interesting topic to do a post about, so why not join me as I discuss the two girls.

I think one of the reasons more people like Eponine over Cosette is because of the fact that she is basically just an avatar for lovelorn girls all over the world. Somehow I think more people can relate to the idea of being ignored by someone they love than the idea of getting the happy ending. (Not that Cosettes ending is that happy really…….Hmmm, I probably should have thought more about this before I decided to do a whole post about it).

Eponine isn’t that different from Cosette when you think about it, most of her actions are solely motivated by her love of Marius too except Eponine takes it to the extreme of effectively throwing herself in front of a bullet for him instead of just moping about him.

Sigh…….I just don’t get the appeal of Marius Pontmercy, seriously Eponine, get over him! He’s really not that great. I only bring him up because from the reactions I’ve seen so far it seems that most people prefer Eponine over Cosette because they think she’s more deserving of Marius than Cosette is. Now if you’re reading this and you happen to be one of those people then I’d really like to know what exactly makes her more deserving. It would be different if Marius had dumped her in exchange for Cosette from the beginning, but he didn’t, the fact is that he never loved Eponine as anything more than a friend and I think Eponine was really really stupid for putting her life in danger for him. True she was brave as well, but still stupid!

By the way, yes I think it’s sad that she died and yes I think it’s sad that her life was pretty crappy all the way up to that point, but why does that make her more deserving of Marius? Marius didn’t love her; it’s as simple as that! Just because she suffered more for him doesn’t mean she deserves Marius, it means she deserves BETTER than Marius! Eponine deserved a better ending than being shot in the chest for a guy who never even gave her the time of day, I think Eponine should have ended up with Enjolras; no seriously I can see those two getting along well with each other.

You what’s missing from Eponines character that I think would have given her some more depth? Some acknowledgement from her about her past connection to Cosette.

I’ll explain, Eponine was pretty much a bully towards Cosette when they were children, which to be fair to Eponine is not really her fault since she was probably only manipulated into acting like that by her horrible parents, but at no point do we ever see Eponine show any sign of remorse for her actions towards Cosette, and I think that’s something she should be feeling really guilty about. She makes no attempt at making any amends towards Cosette In the musical, in fact the only thing she does for Cosette is steal her letter and try to keep Marius away from her out of jealousy.
I don’t get why anyone would think Eponine is a better character than Cosette, sure she’s a very tragic character and I bet a lot of people can probably empathise with her more than Cosette, and yes her death is one of the more sadder parts of the book and the musical but I don’t think that makes her better than Cosette in any way.

Oh Cosette, you are a sweet girl but you really have no personality at all. You are the very definition of the word ingénue! (I just learnt that word recently by the way) You exist solely to be protected and fawned over don’t you! DON’T YOU! (Sorry, I don’t mean to get so angry at you, you just kind of bring that out of me)

It’s actually really hard now I think about it to find any words to describe Cosette except for nice and pretty. That really is about it when it comes to describing her, she’s a character that does absolutely nothing in Les Mis except look pretty and get married and despite that I still really really love her.

I just find Cosette so adorable. Oh don’t get me wrong, she’s also an idiot who has no clue about anything that’s going on around her, but she’s so adorable at the same time that I find it impossible to hate her. To be fair to her though it’s not really her fault she’s so clueless since no one in either the book or musical is honest with her at any point in her life!

I think it’s a real shame that Cosette is hated by so many Les Mis fans the way she is, it’s not her fault that Marius fell in love with her and not Eponine, if anyone’s at fault in the whole love triangle it’s Marius for not noticing that Eponine had feelings for him in the first place, Cosette’s completely innocent in the whole thing.

Unfortunately for Cosette everything interesting that happens to her happens when she’s a child and we don’t even get to see that much of that really in either the musical or the novel. Cosette could have been a much more interesting character if we could have seen some after effects of the abuse she suffered as a child, I know I’ve talked about this before on this blog but I really hated the fact that in the novel Cosette just seems to get over the years of horrific child abuse in the space of one day, and the musical is no better either, at no point do we ever see Cosette deal with any kind of psychological trauma from her childhood, even after meeting the Thenardiers again when she’s an adult. By the way I know that it’s kind of a weighty subject for a musical to deal with but the book didn’t do much better in dealing with Cosette either and I think it’s a shame because it could have given Cosette so much more depth if we actually saw her acknowledge her past for even one second. It’s not that I want Cosette to suffer, I just would have liked to have seen more realism in Cosettes persona, it would have made her a better character and it would have made the story even better than it is. Victor Hugo may be a great storyteller but he knows shit about child psychology!

I think the biggest problem with Cosettes character stems simply from the time period in which she was created in, it’s not her fault that in the 1800’s girls like her weren’t allowed to be anything more than pretty and vapid, it’s not even really Victor Hugo’s fault for writing her like that, he couldn’t have known at the time that the roles of women would change so drastically, I just think it’s a shame that he didn’t write Cosette better because I really feel that there was so much more that could have been done with her if she had been written differently.

I guess the whole point I’m trying to make in this post is that even though Eponine is clearly the superior character in every way, I choose to go down the same path as Marius Pontmercy and ignore all that in exchange for fawning over Cosette. I guess I’m just a sucker for a cute blonde, please don’t judge me too harshly for that!

OK FINE!! Since I’m on the subject, who do I think would win in a fight between Eponine and Cosette…………Well there’s really no contest is there? It’s got to be Eponine. A tough streetwise girl against a bourgeoise pretty blonde? Yeah there’s probably not going to be much of a fight there! I do like to think that Jean Valjean would have taught Cosette how to defend herself but I reckon Eponine would kick her ass until it’s a brand new shape if she was given the chance.